Go Four It Quilt Is Complete

I finished my Go Four It quilt today.  I am sooooo pleased how this quilt turned out.  I haven't figured how many pieces it too to make this quilt.  Someday I will.  I started this project in June of 2017. 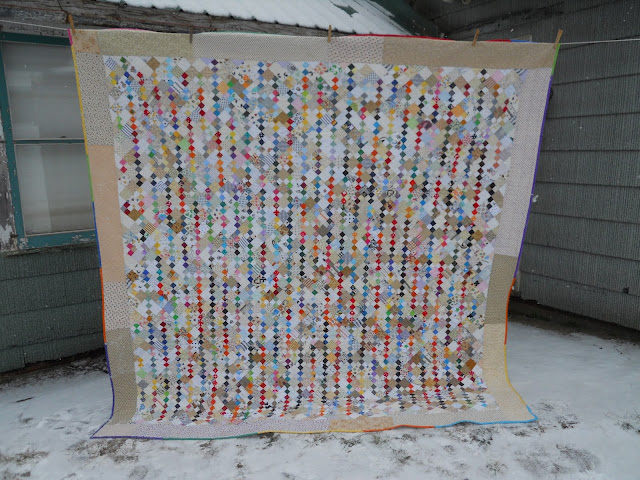 I made a pieced back with a big piece of cheater fabric and some other fabrics that look like they were from the 1980's.  It works out perfect for this quilt.  It will end up on our bed. 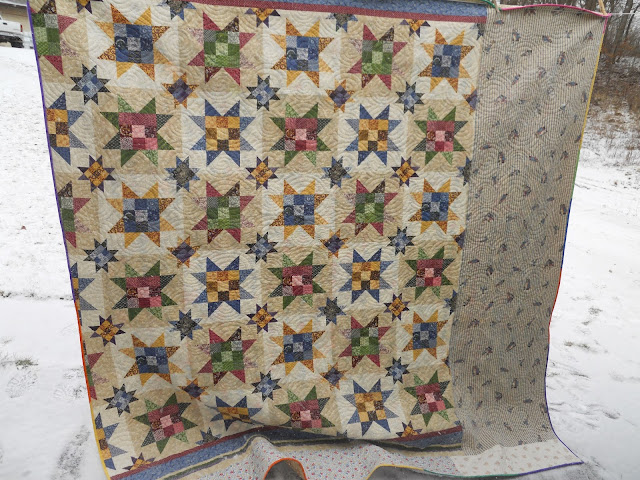 The little colorful squares going down the quilt 1.5" squares.  The Go Four It pattern can be found in the magazine AMERICAN PATCHWORK & QUILTING, April 2015.  I worked on this as a leader/ender project for quite a while.  It seemed like I would make four-patches with the little pieces left over at the end of the month for various projects of the RSC (Rainbow Scrap Challenge.)  Many of these red squares are left over pieces from my Garden Party quilt (Pattern by Bonnie Hunter) that I finished and gifted on Christmas Eve. 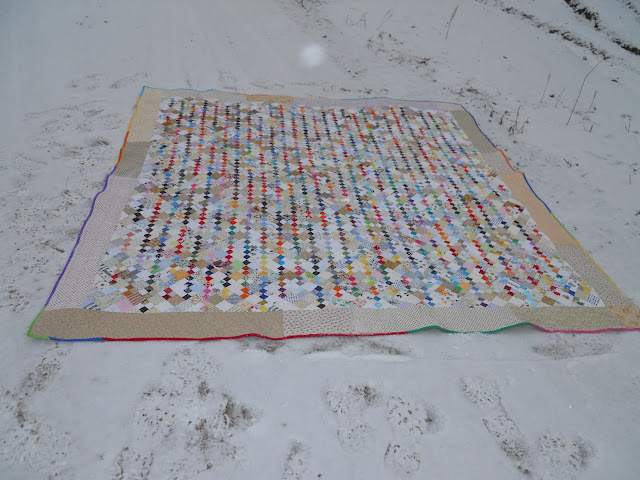 After several attempts due to wind I was finally able to get an "in the snow" pic.  We only had a light dusting of snow on Thursday.  This quilt finishes at 91.5" x 93.5".  I made the border pieces a little wider than the border suggestions in the pattern.  I had planned on the quilt having issues with fullness when it was quilted because of so many pieces.  All the squares and triangles were cut with my Accuquilt dies.  I figured there would be play with all the different bias edges.  I put my little bits and pieces of fabric on the dies so that they fit--not to go with the grain of the fabric.
When I longarm quilted it using my Circle Lord giant template board called Swirls, I started with the quilt on the top rollers.  I floated the last four rows of the quilt (took the one edge off of the roller).  This allowed me to get it even when I measured the edges to keep it straight.  (Thank you for that tip, Linda!)
The borders played so nicely and I didn't have as much play as I thought I would.  Woohoo!  When my husband saw the quilt he really liked the bigger boarders.  I decided to keep them big instead of trimming them down as intended.
I do love the bright strips of scrappy binding that goes around the edge with no rhyme or reason.  I didn't even lay them out to see where the seam hit.  I just took my chances and low and behold NONE of the seams matched up with a corner.  It was just my lucky day.
It was my goal for January to finish this quilt.  I'm linking up at Elm Street Quilts for the One Monthly Goal January Finish Link-Up. 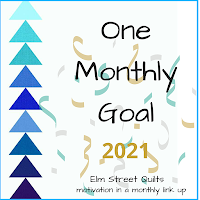 I'm also jumping across the pond and linking up at Valomea's Patch Box. 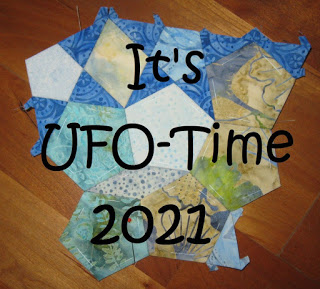 It is a beauty Kathy! The scrappy binding looks as if you planned it, perfect!

Wow, it is done. It is beautiful. Love the wide neutral borders. So glad the floating worked. I have never had a problem doing that as long as I measured every time the quilt moved. You can keep adjusting and get rid of fullness that way. Good thing you used the diecutter. So lovely!

This quilt is a beauty! I love the bright chains of color against the variety of scrappy neutrals. Just perfect!

Beautiful finish! I love the scrappy binding and the size of the border frames the piecing so nice. Good job!

Thanks, Ivani. I really did get lucky this time.

This will take just a little bit longer when I advance the quilt, but the results will be well worth it and actually save me time if I don't have to rip out a row. Thank you, Linda!

Last night I sat in my chair and picked out all the little frays of thread. I loved looking at each fabric in the rows. Thanks for your sweet comment, Nancy.

Thanks, Patty. I know you have been waiting for me to finish this one. Ta dah!!!

Nice finish. It's a beauty. I like the back too.

Congrafulation.This is a great quilt.
Maja

Hi Kathy,
it's so beautiful! I love it.
Elke

This is a real cool project. You are surely very pleased about the quilt. It's amazing.

Love this! Thanks for linking up with Elm Street Quilts One Monthly Goal and congrats on your finish!

I love scrappy and totally love your Go Four It quilt - gorgeous!

Hello
We are professional traders, earning on forex and binary for investors weekly, will love to tell you all more about our investment platform where you can invest funds as little as $200 and start earning $2500 weekly, alot of people has benefited from this investment offer before and during this convid-19 virus, if you passing through financial difficulties due to this coronavirus and you need help paying bills simply choose a suitable investment plan for yourself and start making profit weekly 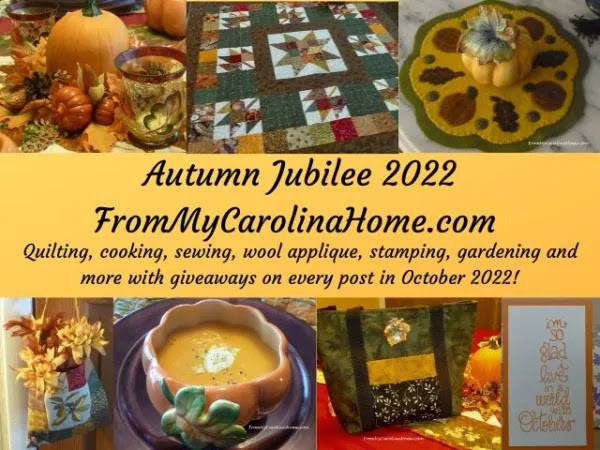