I managed to make a quilt block for the 2013 Accuquilt Barn Block Contest.  I didn't win, but I really do like my block.  I have a quilt planned that will only use the other half of the Drunkard's Pathy block cut with the Accuquilt GO! Baby die.  I didn't want to waste this part.

Submissions were due 4/7/13.  I don't know if someone has already made this block or not.  If so, I don't know what it's called.  I haven't thought of a name for it if it hasn't been made already.  If you think of one, let me know.  I do know that I like it.  It was made with of course, the Drunkard's Path die, the 2" square die, and the 2" strip cutter.  It measures 11.25" finished (11.75").  It's an odd size, but the reason that I made this block is because I am experimenting with using just the "inner pieces of the pie" pieces of the Drunkard's Path block for another quilt and I know I'll have several of the outer "crust" pieces left over that I will need to use. 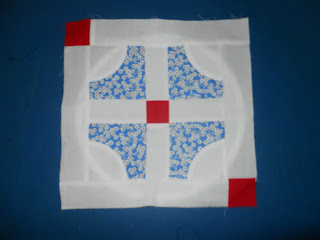