We have a fish tank on the kitchen counter.  It was supposed to be for our son's room to motivate him to sleep upstairs by himself and also be a night light.  Well, that backfired.  Now it's just "my" fish tank in the kitchen.  One of the coolest things that we have in the tank are snails that a lady from church gave us.

But one day I walked out in the kitchen and found this... 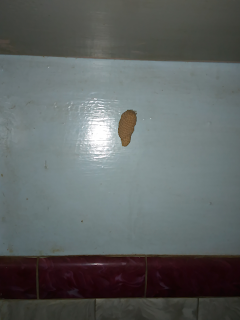 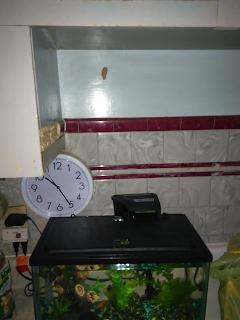 The female snail didn't like it when I took the eggs that she laid on the inside of the hood of the aquarium less than a week before.  I didn't want 200 snails.  The girl that gave me the snails warned me that this could happen if I had a male and a female... which I now know I have.
The female was found on the counter behind the aquarium.  She was dry but I put her back in and she survived another week or so when she crawled out AGAIN and landed on the floor.  I think she cracked her shell.  She passed a couple of days after I put her back from the floor incident.
Posted by Kathy S. at 10:30 PM