This weekend I carried the 30 gallon tote of pink scraps from the house with the longarm down the path to the house that we live in. (See bottom of this post for the story about the two houses if necessary.)

I am starting a new summer project.  Check out all of the details on Kevin the Quilter's Blog.

I'm using my smaller pink scraps to get more variety.  I have pressed fabrics and cranked them through Accuquilt GO! 2.5" Square (2" Finished) die #55059.  What a great die!  You can see that my GO! mat is now cracked.  That's okay.  I ordered more on Amazon.

The little white bin in the first pic is the first 300 neatly cut squares.  I pressed, placed, and cranked scraps through while watching a dvds on my computer.  All are cut now.  It will be fun sewing this week! 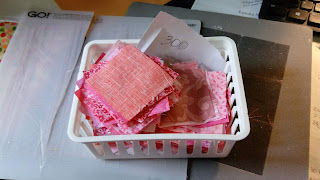 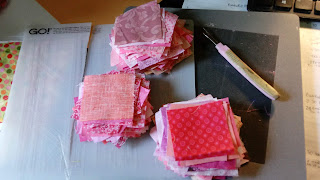 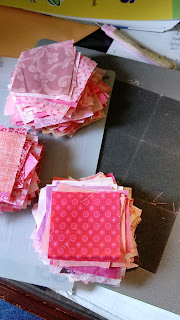 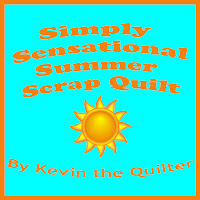 (Back story... we have been building a house by ourselves since 1998.  It's a long, long, story.  Not many people understand.   We get it and that's what matters.  We have done EVERYTHING almost by ourselves.  My husband drew the blueprint, he dug the hole, and he did all of the foundation.  Then we started dating.  We had a bricklayer do the brick.  A concrete guy did all of the concrete.  (Both brick and concrete were too large of an area for us to take on as a project in one summer.)  We put every shingle (except the one side of the garage) on together.  It was a super fun thing that we did when we were dating.  When it came to doing the electric, I would drill the holes where he told me and he would run the wire.  When it came to putting in the plumbing, I would carry the pvc and put in place while he made sure it was together correctly.  I was just the "helper".  I was there.  He did the drywall with my drywall jack when our son was tiny, tiny.  One piece at a time.)

It is still not finished.  I am not complaining.  This winter he put in a working bathroom!  This is a big deal to me.  My longarm is in the someday living room.  His huge attached garage is finished--and full.  We live on the same property in the house that his grandparents lived and raised their family.  We have food on the table and our bills are paid.  Not many people get it, but it works for us and we love it.
Posted by Kathy S. at 4:08 AM