I'm trying to remove fast food from my diet.  Maybe 2019 it will be 90 percent gone.  I was totally annoyed with McDonald's today.  I struggled to order from the kiosk.  It would also not take my debit card.  When I questioned the counter person how to order a six-piece spicy bbq six-piece chicken strips and an ice water she told me that, "I don't know how to work that thing..."  Really? 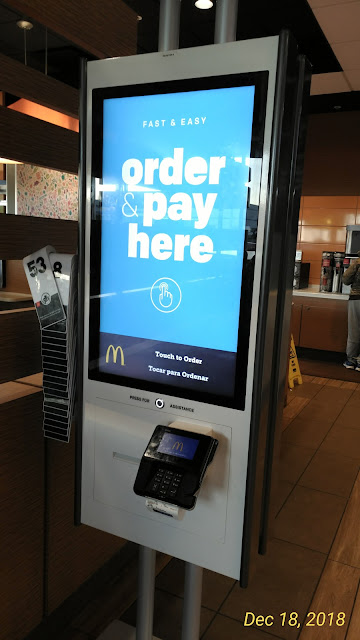 Minutes after I ordered the chicken entrée they told me that they were out of the bbq sauce and would have to go to another store to get it.  They didn't know how long that would take...  I just said give me regular bbq sauce.
THEN they gave me the chicken.  The box said six pieces on it, but it only had four pieces.  Since I paid for six pieces I took the box to the counter.  The counter person said she would fix it.  They threw two more pieces of chicken in it, closed the lid, and I went back to my seat.
I opened it to find THIS:  See how the pieces on the right are different?  Whatever.  I think it's the universe's way to tell me that I shouldn't be eating fast food anyways.  My son's meal was perfect--of course.  He was happy. 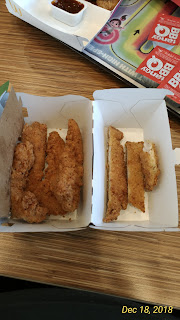 Oh, I'm not a hand sanitizer person...BUT since I'm complaining, they were out of those too. 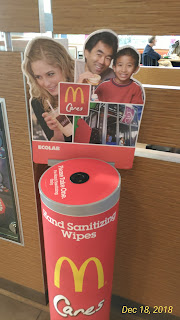 And another thing... I'm not a fan of the dark grey outside color of all of our area McD's now either.  I love the color grey in a quilt...but not on a gloomy McDonalds... just a piece of my mind today.

I heard on the radio last week that they tested thousands of McD's kiosks for bacteria. All of them had feces on them....EWE!

None of our McD's have the kiosks. I usually try to go through the drive-thru anyway, and not that often. I'm more likely to go to Wendy's because of the $4 meals and oh, that chili! I'm really getting over fast food, mostly. There's one southern chain here I like, but I don't even go there much any more.