I knew when our young cat came back from being gone almost two months during the winter that we would probably have kittens.  I think someone kept and fed area cats in their barn during the heavy snows.  She didn't come running to her food bowl when I called for her Saturday morning.  Hmmm.

This is what it looked like when I first opened the roof to the cat box. 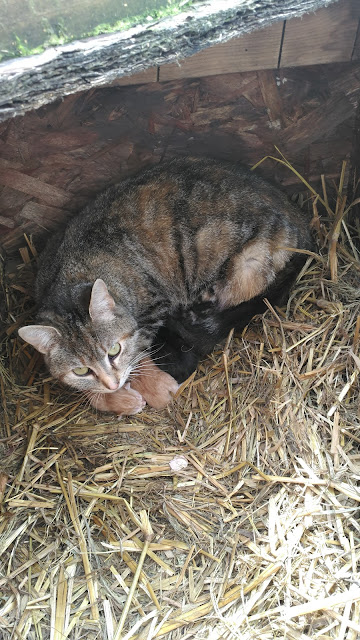 Betty knew here kittens were safe and went to get some food.  Five tiny kittens! They are perfect.  There's a light yellow, dark yellow, light tiger, dark tiger, and one super dark tiger. 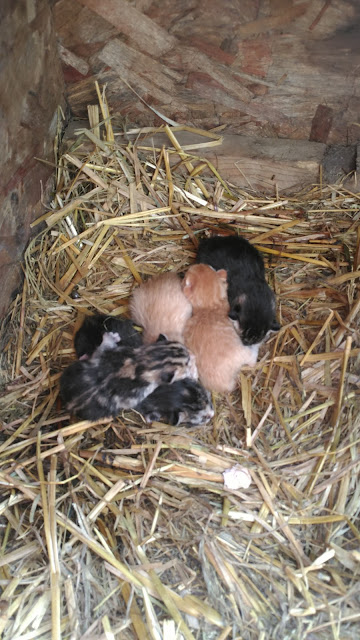 Betty's cat box is up in the chicken yard.  I nailed a board over the opening of the hole so that a chicken wouldn't go in there and eat or peck at the kittens.  Chickens will eat a mouse.  I didn't know what they would do to a kitten.  When I arrived in the evening to put the chickens in (about 7pm) I saw one Buff Orphington chickens standing in the corner by the gate waiting for me.  It was like she was scolded.  Here tail feathers were down.  She wasn't missing any feathers.  I noticed a scuffle with the ducks around 5pm, but it ended quickly.  Hmmm.  Was there a turkey in the field causing them to scurry?  Did a fox run by?  What caused all the commotion?  Those ducks of mine are real tattle tales.  They always let me know when something is off.  It ended quickly and I didn't go check on it.

This is what I found 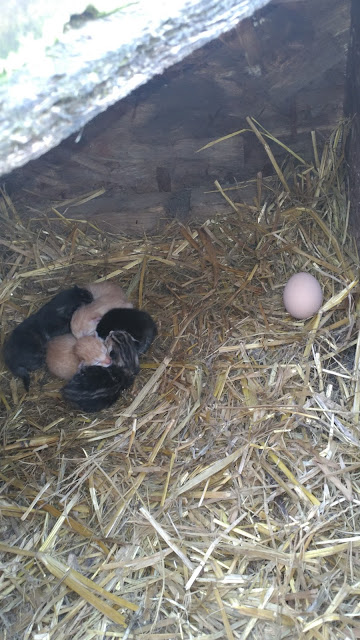 Betty was in the box with her kittens.  Apparently a chicken visited the new family as well.  The light brown egg was cracked in straw?  Appears to be a scuffle.  The kittens seemed fine.  Betty ran out as soon as she realized that I was there to guard her kittens.  She went back to her food bowl.

I surprised her by giving her the raw egg on top of her food.  She gobbled it up before I could put the rest of the chickens in.  I have to keep her food bowl away from her box because chickens LOVE cat food.  I give them a handful of it as a treat -- but not too much.  It has a lot of protein in it.