My bloggy friend, Pokey, posted about a sew-along at Terry's Treasures.  This looks like a great place to use my GO! Baby and a bunch of the sorted scraps that I sorted by color.  I know it calls for a charm pack, but I just gotta do scraps!  Hmmmm.  Since I have had three Friday finishes I think I should reward myself and just start another one.  These two bags of reds and pinks/maroons could be great for cutting in February.  QA's keep me grounded and on track (usually). 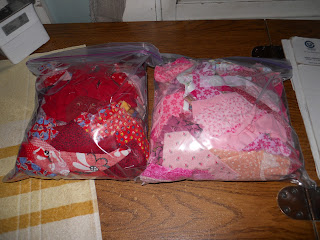 Thanks, Pokey! (and Terry).

(Above is the picture of the quilt from Terry's Treasures.)
It's a Moda Bake Shop Recipe  called Wiggly Whimsy by Rebecca Silbaugh.
Posted by Kathy S. at 1:54 AM