Out Standing In Their Field

One Friday night (our date night -- which includes all three of us) I mentioned to my husband that I wanted to go out and stand in the field of yellow weeds for a family photo this weekend.  This is the field behind my chicken area and garden.  These weeds are EVERYWHERE in our neighborhood.  I'm pretty sure it is goldenrod.  Goldenrod is not the same as ragweed.  Ragweed seems to be the stuff that puts all that pollen in the air causing allergies.  None of us have a problem with this plant kicking up our allergies -- which we are fortunate to not have many allergies (except poison ivy.) 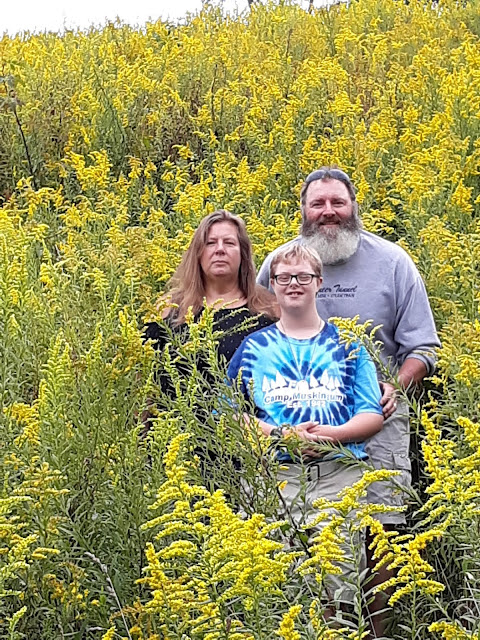 The funny part is that we had my phone set up on a tripod.  Typically my husband doesn't want to participate in photos like this.  Owen and I were in the house.  I was about to take a nap.  My husband was working outside moving dirt and putting in the new driveway with his big equipment.  I didn't even do my hair.  My husband came in and said, "Everybody get in their good clothes."  I guess this is what we all thought we should wear at the time.  It's funny, but looks natural for us.  That's another thing that I love about this picture.  I can't believe that my husband grabbed that sweatshirt.  It was like 90 degrees that day. 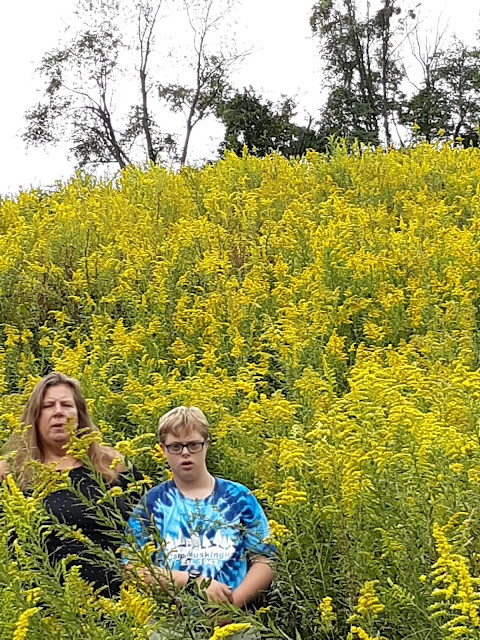 My husband would tell us to stand in the field.  He got the camera set up (he did not know how to operate a smart phone at this point yet.  Here I am telling him which buttons to push, that he had ten seconds to get to the photo spot. 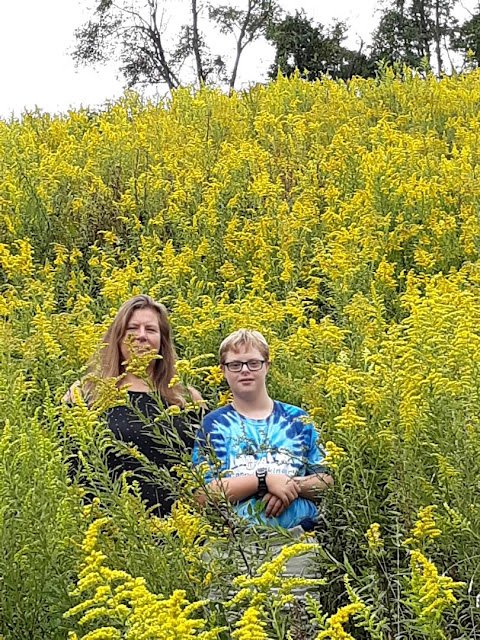 Several photos have mouths open and eyes shut.  Owen and I couldn't stop laughing at Ed running through the field to get to the spot.  Finally I told Owen that we had to close out eyes so that we wouldn't laugh so much.

The photo below is a keeper!  I had this enlarged on canvas and need to hang it in our livingroom. 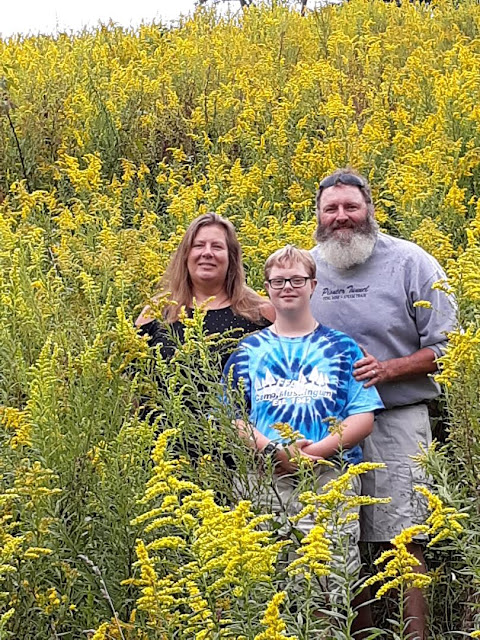 See below how Owen and I kept laughing?  LOL. 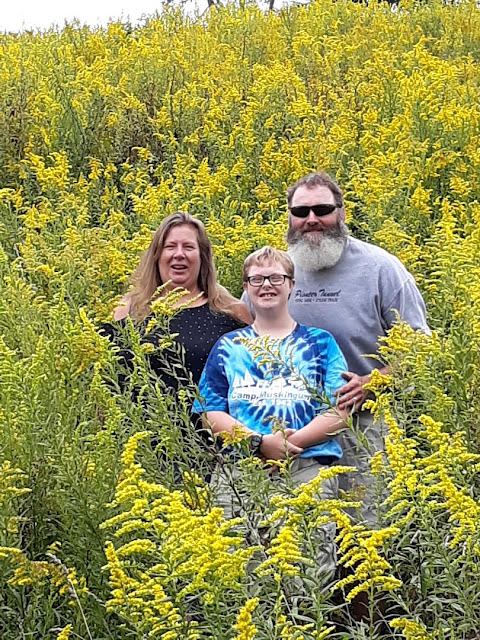 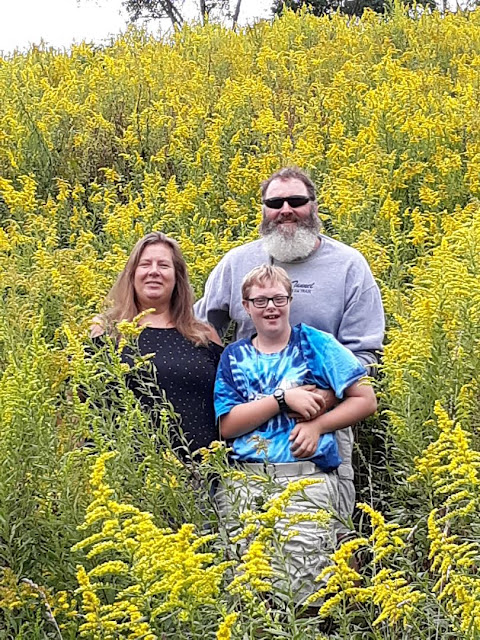 I wanted another photo in front of the old berry barn.  This was a one-take shot.  Ed was hot, sweaty, and done with photos. 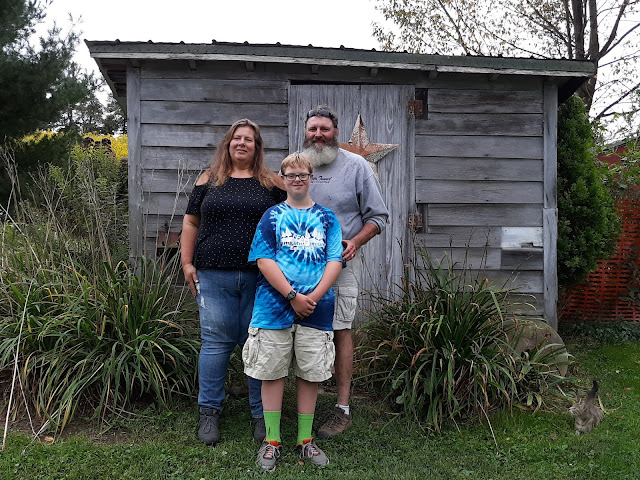 I got this dramatic shot of Owen leaning up against my ocean container.  This is an awesome building that my husband got me for Christmas.  He put really nice doors on an ocean container.  It even has electric!  It's convenient that he works where he can borrow a semi truck/trailer and has the equipment to move stuff like this in place.  (It also gives him a little extra storage in the end that I'm not using.) 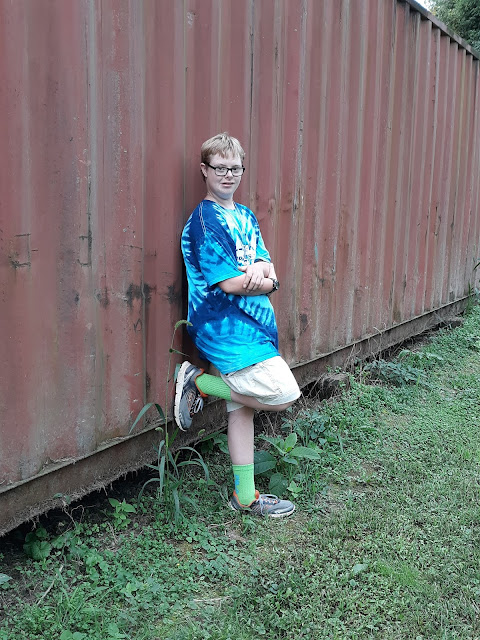